Anyone done extended listening with a Simaudio Moon 750D? 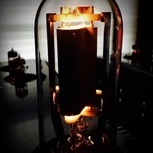