Listen For Your Self 2 Albums in HiRez and MQA 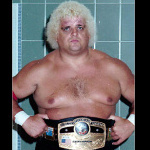